My name is Amber. I'm a twenty-five year old nobody living in middle America with four cats, my boyfriend and a betta named Fish (creative, I know). I like to read, play videogames and waste my time on the internet. I'm into girly shit like make up (specifically MAC) and nail polish, and dudely things like fire arms and kitty cats. I like memes, target shooting, photography, body modification, refreshing the same three pages over and over, standing up for things I believe in (also known as activism) and a bunch of other things I don't feel like typing. I have a lot of time on my hands and I enjoy spending it on things like this blog. I get a kick out of cataloging things I own (I do it with just about everything), which is part of why I started this blog.
In the decade or so that I've been experimenting with make up, I've become pretty okay at it. I get compliments frequently and have had a few requests to do tutorials on youtube. I tend to stick with bright make up, so don't expect to see many neutral looks from me. While I've been playing with nail polish since I was little, I've only recently become re-obsessed. I started painting my nails frequently in the last year to try and put an old bad habit, thumb sucking, to bed once and for all. So far, it's been working; nail polish tastes like shit after all, but I also just enjoy doing my nails :)
If you have any questions for me about myself, my blog, or anything else, feel free to contact me - my information can be found in my Blogger profile. 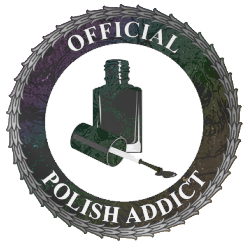